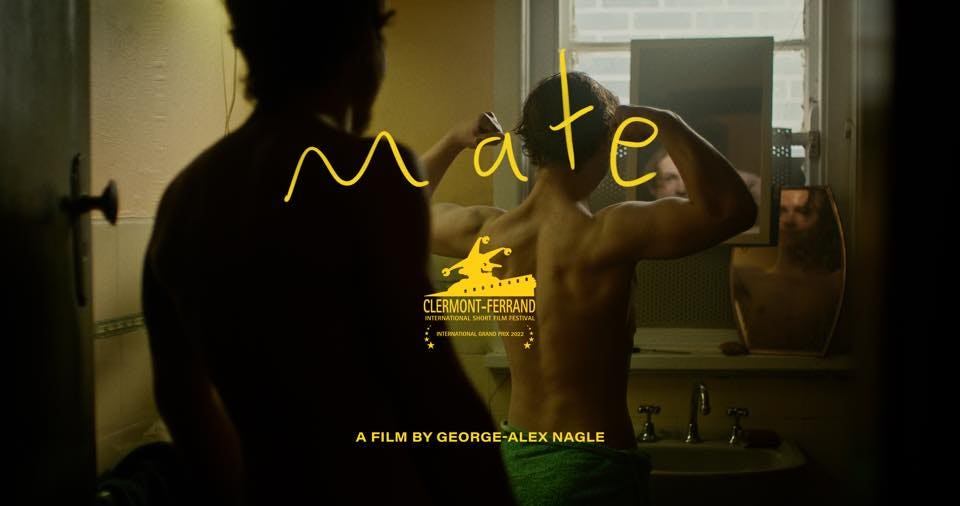 Australian filmmaker George-Alex Nagle and his team are celebrating after winning the prestigious Grand Prix in the International Competition at the world’s largest and most prestigious short film festival with their film MATE.

The film, featuring lead actors Joshua Brennan (The Long Road Home) and Jeremy Blewitteremy Blewitt (Between Two Worlds) is an uncompromising examination of masculinity and maturity, and explores the challenges of personal growth within a changing social landscape.

Established in 1979, the Clermont-Ferrand International Short Film Festival (Festival international du court métrage de Clermont-Ferrand) is dedicated to showcasing the best short films from around the world. It traditionally sees over 150,000 people attending screenings over a week-long period, making it the biggest short film festival in the world and the second largest film festival in France, after Cannes.

Director and co-writer George-Alex Nagle said; “On behalf of the entire cast and crew of Mate, we are overjoyed and deeply appreciative to receive this award. A lot of hard work by many talented emerging Australian professionals just paid off with a significant nod on the global stage. It’s all a little surreal. It was an honour enough to exhibit our film alongside 76 amazing and unique films, representing Australia across 55 countries, but to take home the top international prize was something we certainly weren’t expecting nor prepared for. It feels incredibly validating to join the ranks of some of my favourite filmmakers who are previous Grand Prix winners.”

Co-writer and executive producer Ben Tarwin said; “It’s really great to see our film, which deals with some deeply Australian social issues that resonate so strongly with an international audience. We’re a bit shocked by this, to be honest, as well as incredibly honoured.”

Executive producer Nick Bolton comments; “Making the film during COVID lockdown was extremely challenging, however the backdrop of Western Sydney suburbs played a significant role in defining the characters on who they are and how they will be accepted in this changing world around them.

Prev Article
View All
Next Article